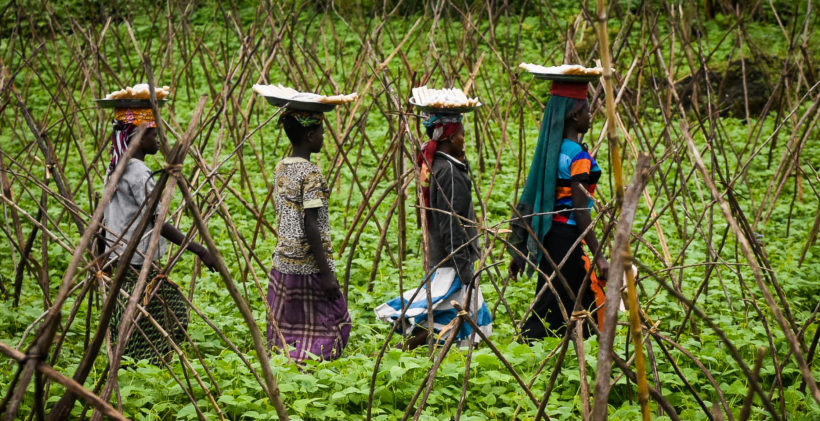 Solidarity with Refugees in truly difficult contexts within the African Continent

By Andrew Galea Debono
Maiya (her real name has been changed to protect her identity) is a young unmarried Congolese woman from a minority ethnic group. For the last five years, she has been living with her family in an isolated refugee camp with a population of 20,000 people in the neighbouring country of Burundi. She was born in a small village along the shore of Lake Tanganyika, in the east of the Democratic Republic of Congo (DRC).

Before her family was forced to escape from their village, Maiya’s parents both worked as farmers on the small plot of land they owned, mainly cultivating enough to feed their own family. At times, her father also caught fish from the nearby lake in order to supplement their diet. Despite her young age at the time, she often helped her family in the fields or by carrying water and firewood on her head for several kilometers. Her family did not have the financial means to support her education beyond primary school, so she left school after completing 5th grade.

Her family barely had enough to survive on, even though the region they lived in is one of the most mineral rich areas in the world with large deposits of cobalt, copper, diamonds, tantalum, tin and gold. None of the proceeds from mining ever found their way to the pockets of Maiya’s family and the hundreds of thousands of other people living day by day in the region. Instead, a part of the revenue from the sales of these minerals has been fuelling more than twenty years of a still ongoing armed conflict, whilst another substantial part has been enriching private individuals and companies in other countries around the world.

Life for Maiya’s family and neighbours was physically tough but, worst of all, everyone lived in fear. Mai Mai rebel militias, formed mainly by young men from the area, and other militias active in the area often raided villages, killing, plundering and raping. It was only a matter of time till Maiya and those closest to her would also be targeted and their lives changed forever.

Maiya’s world was forged long before her birth. The DRC has a long complex history of slavery, colonialism and destructive politics. Many books, including the excellent ‘Dancing in the Glory of Monsters’ by Jason Stearns, have documented the tormented history of a country that was created at the whim of King Leopold II of Belgium in 1885 (at the time, Leopold II called it the ‘Congo Free State’).

The many small kingdoms and tribes that lived in the territory were split randomly, and just as randomly were grouped with others that had nothing in common with them, including language and customs. Due to the large distances and thick jungle separating them, many of the newly-Congolese tribes previously never had any contact with each other. The Belgians proceeded to systematically scatter people all over the new country, separating tribe members and even nuclear families. The colonisers needed to weaken the fabrics of local society in order to control the vast land they had been given.

Leopold II managed to obtain this huge territory—approximately the size of Western Europe—at the Conference of Berlin by pretending to be a philanthropist (in his words, he had: “… undertaken the work in Congo in the interest of civilization and for the good of Belgium” ), whilst in fact he created a money-making machine of proportions never seen before in the world. The whole territory, and those unfortunate enough to live there, only served the purpose to enrich the Belgian king. In particular, ivory and rubber were the prize resources that were taken from the territory at the time. Many of the fine buildings still admired in Belgium today were built through the blood, sweat and bones of millions of Congolese people. The historian Adam Hochschild, who wrote a number of books about the colonisation of Congo, estimates that up to ten million Congolese may have died as a result of Leopold II’s rule.

The African continent in the 1960s was a land of new hope and determination. Colonisation was finally coming to an end and several inspired African leaders came to power, such as Kwame Nkrumah of Ghana, Samora Machel of Mozambique, Kenneth Kaunda of Zambia and Jomo Kenyatta of Kenya. The Polish author and journalist, Ryszard Kapuściński, experienced this exciting period first hand as one of the few journalists to travel around the continent to document the decolonization process in several countries. His books such as ‘The Shadow of the Sun’ and ‘Another Day of Life’ are vivid descriptions of the fall of colonisation and the early years of independence in a number of African countries.

The Democratic Republic of Congo (after independence from Belgium it was briefly called ‘Republic of the Congo—Léopoldville’) also had a charismatic young leader called Patrice Lumumba. Lumumba was prominent in the anti-colonial struggle and was eventually elected as the first Prime Minister of the newly independent country in June 1960.

Being a socialist leader during the Cold War, in a country with access to vast deposits of uranium, many countries in the West, in particular the former colonial masters Belgium and the United States of America, saw Lumumba as a serious threat. Barely three months after he was elected as Prime Minister, in September 1960, Lumumba was removed from power and arrested. Shortly after escaping, he was kidnapped by Conglese separatists from the Katanga province, who were backed by the Americans and Belgians. He was killed in December of that same year, in what Belgian author Ludo De Witte defined as “the most important assassination of the 20th century”. The CIA historian, David Robarge, confirmed the leading role of the US government in Lumumba’s murder in a paper written in 2014 for the Foreign Relations of the United States (FRUS) series, which was mainly based upon declassified CIA documents.

To make matters worse, the US government backed Mobutu Sese Seko, a young journalist and politician who at the time was the Chief of Staff of the Congolese army, to be the successor of Lumumba, envisaging that he would be easily manipulated by them. The Americans passed on money to Mobutu with the explicit order that it should be used to buy the support of key officers and legislative leaders. Nevertheless, instead of becoming their ally, Mobutu turned into one of the most notorious and brutal dictators in the history of mankind. He was only removed from power 37 years later, after a civil war that mainly affected the east of the country. The ensuing chaos still engulfs eastern DRC till today, fuelled by the competition for the mineral riches found there and what is considered to be a regional ‘resources curse’.

In modern day DRC, Maiya and her family’s lives were randomly shattered after their village came under attack by a group of the Mai Mai militia. Maiya, her mother and sisters were raped in their home by the militiamen in front of their male family members, but somehow managed to escape. As they fled, their house was burnt to the ground and they saw that many of their neighbours had been killed.

A report by the International Rescue Committee (IRC) in 2014 found that approximately 40% of women and girls in eastern DRC had suffered some form of sexual violence. The situation has not improved since then, as political instability and fighting over access to resources continues. Under shock and desperate, Maiya and her family found themselves with nowhere to go. The Mai Mai and other militias have a strong presence all over the region, so Maiya’s family had no option but to cross the border into the neighbouring country of Burundi, which was a three day walk around the lake from their village.

Burundi is a small landlocked and densely populated country, with serious political instability of its own. Having very few natural resources to count on, the World Bank has calculated that Burundi is one of the five poorest countries in the world, with 72.9% of the population living below the poverty line. Nevertheless, Burundi currently hosts over 65,000 Congolese refugees. UNHCR (the UN refugee agency) estimates that it could receive another approximately 15,000 refugees in 2018.

Around 45,000 refugees live in camps set up on land donated by the Burundian government and managed by government officials with the support of UNHCR and a number of NGOs. The other 20,000 refugees struggle to earn a living in urban areas around the country. Like the thousands of people still fleeing from the DRC, Maiya and her family applied for asylum soon after entering Burundi. All the adults in her family faced intense interviews conducted by specialised government staff in order to ensure that they really fled from the DRC due to reasons listed in the 1951 Refugee Convention, which would allow them to benefit from the support that is afforded to recognised refugees around the world.

A person claiming to be a refugee in Burundi (or in any other country that is a signatory to the 1951 Convention) must prove to be outside their country of origin and to have faced individualised persecution due to one or more of the following reasons: their race, religion, nationality, political opinion or/and membership of a particular social group.

Maiya qualified as a refugee on three counts: she was from a minority ethnic group that is often targeted by militia groups in eastern DRC (which falls under ‘race’), imputed political opinion (since her ethnic group is considered to oppose the Mai Mai militia) and membership of a particular social group (due to the high amount of sexual violence in eastern DRC and the stigma suffered by rape victims, victims of sexual violence such as Maiya are considered as members of a particular social group). A refugee also needs to prove that they cannot go back to their country of origin due to the ongoing situation there. Given that the civil war in eastern DRC has been going on almost continuously since 1997 and shows no signs of slowing down, this is easy to prove.

It is logistically and financially difficult for a poor unstable country such as Burundi to host thousands of refugees. Burundi is an independent country that has no more responsibilities towards refugees fleeing from the DRC than any other country. Burundi just happens to share a border with the DRC. Yet, as a signatory country to the 1951 Refugee Convention, and out of a sense of solidarity, they host as many refugees as they can, always trying together with UNHCR to find solutions to the high number of refugee arrivals during particular times of instability in the DRC.
UNHCR statistics show that there are currently around 24.5 million refugees from different countries around the world. Turkey is the country that hosts most refugees in the world. The economically developing countries—Uganda, Pakistan, Iran and Lebanon—complete the group of top five worldwide refugee hosting countries. One would expect the world’s richest countries around the world to do more to provide shelter to those in need, taking the example of those countries that do their utmost to show solidarity despite their economic troubles.